I refuse to make any commitments on my blog but I will share what I would like to do.  You may wonder why, I would not make a commitment that is not particularly earth-shaking and where the consequences would be minimal.


Like all stories, it goes back to my childhood.   I was always in the second tier which, in reality was pretty good.  Academically, I was just fine but I was not on the honor roll.  Sports, I was a champ in ping pong......need I say more?  Music, I had the opportunity to play in Carnegie Hall but I didn't.  I had lots of friends, friends I could have been proud of but I never thought of that, then or now.  If I really think about it, they were not the most popular girls but they were the most liked.


I worked on the literary extra curricular activities, the Year Book and the newspaper where I had my own column and wrote many other articles.  Gee, I wrote a play in third grade and the teacher wanted it presented.  (Note the wanted it presented with no follow-up.)


I always did well but was not the top or the best.  Did I want to be?  I don't remember ever coveting those spots and thought, I was happy being who or is that whom, I was?  (second rate in grammar)


Before I bore you with this, my point is, that when becoming an adult, I had the need to run my own world, to determine what was going to happen.  When I got married, I had plans and for a while, life was what I planned.  It was like planning made it happen.  For years, I felt this control and then the day came when I knew, it was not real and I was at the hands of a much Bigger Authority. Since, I realized, life has become more challenging.


Now that I know, I am not in charge, I don't make promises or commitments.  I am not saying, I don't keep any.  I do but I do so, without verbally stating the information.  So no promises about weekly muffins........


We are a family who enjoys muffins.  My husband asks for mini muffins so he can grab just a bite, as he passes the dish, piled with muffins.  I prefer a real sized muffin to take to work with me.  Either way, muffins have always been a treat that disappears quickly.  I do try to freeze half of them for another week but, I don't necessarily get there, in time.


I would like to bake a different kind of muffin, each week.  Since, I pretty much cooked salmon in different ways, weekly for over two years, the muffins should be easy to accomplish but only time will tell. So here goes........ I am starting with a Apricot Almond Muffins called Big Beautiful Muffins in  the American Test Kitchen.  The Family Baking Book is filled with recipes that work and can be changed to fit your preferences.  They work and taste good, a winning combination.


I used a mold, I have that is bigger than regular muffins but not that much, as to call them cakes or even mini-cakes.

Use a quarter cup measuring cup and place batter in each of the cups.
Bake until golden and a toothpick inserted into the center of the muffin comes out with just a few crumbs attached, 25 to 30 minutes.
Let the muffins cool in the pan for 5 minutes, then flip out onto a wire rack and let cool for 10 minutes before serving. 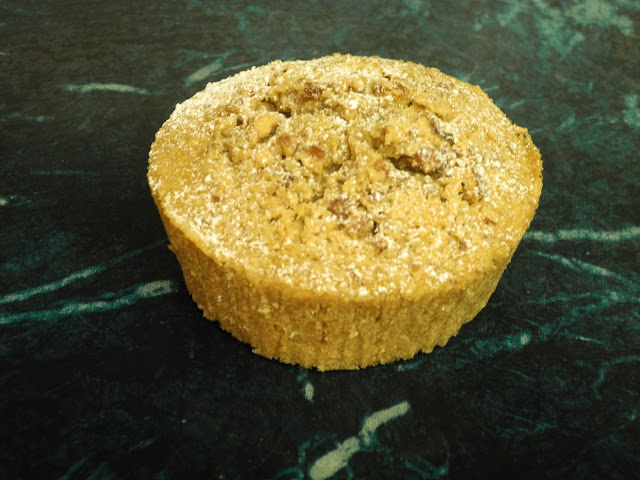