December 13, 2011
Chanukah is coming and one of the foods, commonly made, are those delicious latkes, usually potato.  As a rebel, I make different kinds of latkes such as carrot, sweet potatoes, broccoli and zucchini.  Of course, the best are cheese latkes.  I plan to make some and share them with you.  Today, I am sharing some latkes from other blogs.  You do remember me, Bizzy the Explorer, hijacking Chaya's blog.

I first visted ECurry and found Purple Potato Latkes.   I am getting hungry. 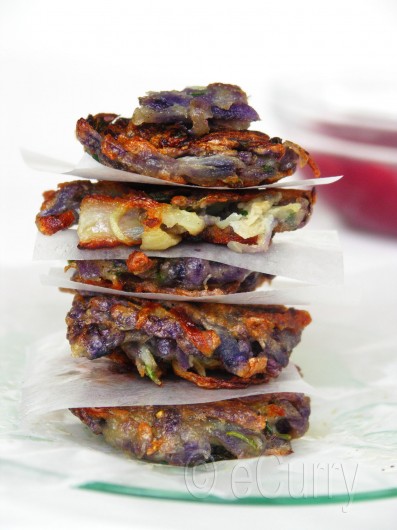 Then, I found Family Education Blog with Potato-Apple Latkes.

Below are Sweet Potato and Leek Latkes from Classically Kosher.

Smitten Kitchen who has the best recipes has Zucchini Latkes

As I said before, I will do my best to post as many latkes, as possible, in the next two weeks so you can experience other than the delicious potato latkes.