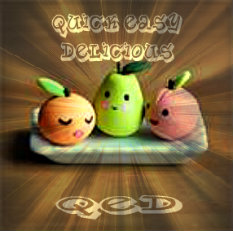 It is hard coming up with dinners, these days.  When you are cooking for hours on end and all the food is for the holiday, there is nothing to eat.  Sounds silly but it is true.

We have four major meals, this weekend and another four on the 7th and 8th days.  That is a total of four for two days.  As I cook, I place each completed dish, on a list with a designation as to which meal, it is for.  I dare not eat it up.  It just means more cooking and as much as I love cooking, I am on overdrive, right now and  I am not looking to create more meals.

Since, I had salmon, I made that for dinner.  I did it in a skillet in a liquid filled with seasonings.  The problem is that, these were not necessarily the ingredients, I had planned to put in.  I had used some soy sauce but saw, I need more and reached up, for the bottle, added more to find, I was holding Worcestershire sauce.  Now, I had both in the recipe and I could not imagine, how they would blend.  I also had put in some white horseradish from a jar, honey and some onion powder.

I had to trust it would be edible.  That was not my big problem.  I could not imagine what to serve it with.  I didn't want to use potatoes since we eat more potatoes than  you can imagine, on the holidays.  No rice, no pasta, no quinoa (although some people do eat this on Passover).  What did I come up with?  Spaghetti squash.  This is a great pairing.

Dinner was a success, much to my surprise. 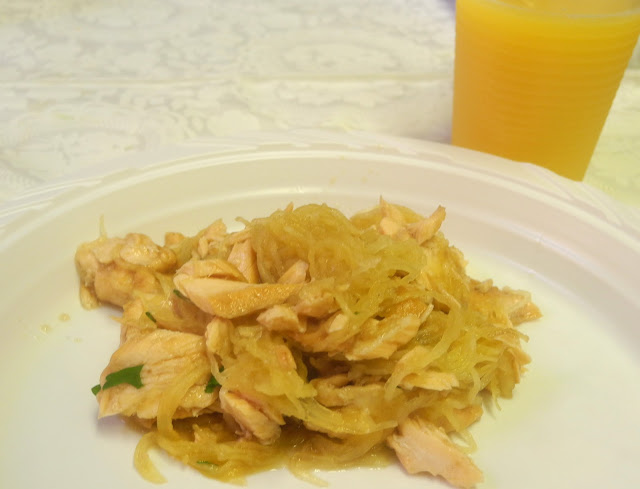 
Bake in oven for 45 minutes.  Remove and let cool a little.  Cut in half and remove the pits.
With a fork, pull out the strands and place in a serving dish.


Mix all ingredients except the salmon.  Place a little to cover the bottom of the skillet.
Add the fillets and cover with remaining liquid mixture.
Cook in pan for 10 -12 minutes.


Cut salmon into small pieces - 1/2 inch.  Place salmon and liquid on the spaghetti squash.  Mix the squash with the liquid and salmon.  Top with a green like parsley or cilantro.  Serve. 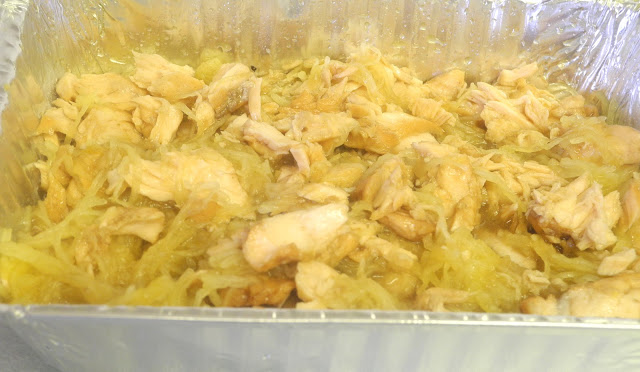