July 11, 2011
During a visit to Mary's of One Perfect Bite, I came across this recipe although her's used whole wheat pasta while mine is gluten-free.  This does not change the recipe.  Each of followed the directions on our packages of pasta.  The rest of the meal should be the same except..........
Pesto originally was made in Genoa. Italy.  The traditional pesto is made up of basil, garlic, pine nuts, olive oil and Parmesan.  That was the first kind, I made.  To my surprise, I found pesto with a multitude of vegetables and nuts.  The word, pesto, comes from a pestle because it was made, using a pestle and mortar.
A pesto is versatile and can be used in a multitude of ways.  I like it on a baked potato with some vegetables on top.  Then comes the pesto to pull it all together.
Try it on pizza.  Nowadays, we see the many faces of pizza and no longer do we have a limited choice in toppings or sauces.  We see white pizza, red pizza and green pizza.
Meat and chicken go well with the flavor of pesto.
What about a fresh slice of crusty bread with some pesto smeared on it?
Add a little to scrambled eggs or mash a little into deviled eggs.
As was done here, pesto goes with almost any kind of pasta.
I am sure many of you know Mary or at least her recipes.  She has an outstanding blog and many of us make visits there, on a regular basis.  There is always a new recipe to greet us and for me, I usually want to make that recipe.  Over my blogging time, I have done just that and as a result, I had success.

Whole Wheat Pasta with Walnut and Sun-Dried Tomato Pesto...from the kitchen of One Perfect Bite inspired by a recipe originally appearing in Taste of Home Magazine

Ingredients:
1/2 cup sun-dried tomatoes (not packed in oil)
1/2 cup boiling water
12 ounces uncooked gluten-free spaghetti
2 cups loosely packed basil leaves (I did not have enough basil but I had plenty of parsley in my herb garden, so I used a mixture of both.  I would guess, there was a little more parsley.)
1/4 cup grated Parmesan cheese
1 garlic clove, peeled  ( As far as I am concerned, the garlic is necessary but since my husband gets rather sick, when he eats it, I had to omit it.)
1/3 cup reduced-sodium chicken broth (vegetable broth)
1/4 cup chopped walnuts, toasted
1/4 teaspoon salt
1/8 teaspoon pepper
3 tablespoons olive oil

1) Place tomatoes in a small bowl and cover with boiling water.Let stand for 5 minutes. Meanwhile, cook spaghetti according to package directions.

2) Place basil, Parmesan cheese and garlic in a food processor; cover and pulse until chopped. Add tomatoes with soaking liquid, broth, walnuts, salt and pepper; cover and process until blended. While processing, gradually add oil in a steady stream.  (I had to use my blender and did not expect good results.  The walnuts were the only ingredient that did not blend completely but we liked the little bit of chunkiness.)

I pretty much followed Mary's recipe except when I either did not have the ingredient or it could not be eaten for health reasons.


We enjoyed this tremendously.  We did not use too much on the pasta.  We mixed it until spaghetti was lightly coated.  It was filled with flavor from the pesto.  My gratitude to Mary. 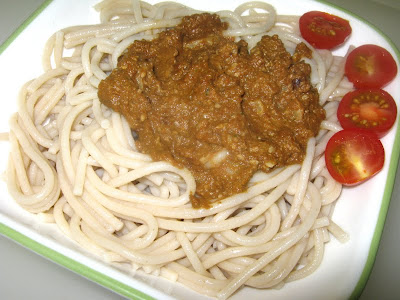