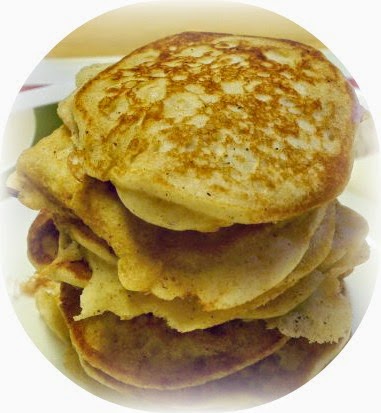 I love cinnamon, the fragrance, the taste and food that contains it.  These pancakes were a natural considering the yearning for more and more cinnamon.


My husband usually turns down pancakes for breakfast and happily has his cereal.  He surprised me, this time, when he heartily agreed to pancakes.  I am, always happy, when we have pancakes so there were two enthusiastic participants, awaiting breakfast.  I debated adding apples to this recipe.  What are apples without cinnamon, what is cinnamon without apples.  Actually cinnamon is just fine without the apples so I stuck to what I expected to be a plain pancake.

Actually, the cinnamon really enhanced the pancakes.  My husband ate them plain and I added a little syrup.  We both left the table, satisfied.

Method:
In a bowl, combine the flour, sugar, baking powder, cinnamon and salt.

In another bowl, combine the egg, milk, oil and vanilla.

In a lightly greased skillet, drop batter by 1/4 cupfuls; press lightly to flatten.

Fry until golden brown, about 2 minutes on each side. Serve with syrup.