I have been yearning for cinnamon for weeks.  I even bought (shocking) ready made cinnamon rugelach.  I did not even have to eat them to be happy.  The aroma saturated the area and I just sat there, sniffing.  Heavenly.

Anything, I have baked has had cinnamon in it, if at all possible, for weeks.  I dream about cinnamon, talk about cinnamon and finally, this morning, I gave in and made myself stuffed French Toast with cinnamon in the filling and in the batter.  Lots of cinnamon.......

Delicious is an understatement for this delightful dish.

Put oil and margarine in large skillet or griddle.  Heat slowly.
Cut crust off bread, if your prefer.

Combine cinnamon, vanilla, milk and eggs.  Mix well. Place in a shallow bowl.  Put aside.
Combine whipped cream cheese with 1 teaspoon of cinnamon and 1/2 teaspoon vanilla extract.
Make sandwiches.  Spread out two slices of bread.   Top with cream cheese mixture.  Top with other piece of bread.
Soak in egg mixture.  Each side should be soaked.
Turn up heat under griddle to a medium heat and put sandwiches on griddle.  Cook for two minutes on each side, being careful not to burn.  It should be a golden brown.

Remove from heat and enjoy. 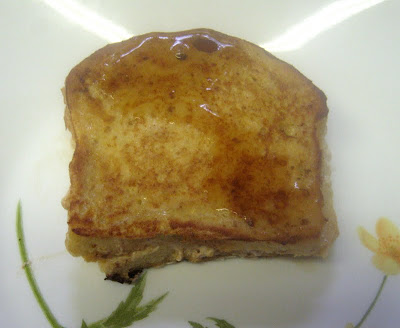 Linked to Sweets this Week at Sugar Bananas