June 03, 2011
I love $5 dollar Dinners.  It is a place to find great recipes, organize and save money.  One of the recipes that caught my eye was this spaghetti pie.  Due to the shape of the pan, I used, I ended with a strata rather than a pie but I am pretty sure, I brought the taste and texture with me.  A major change, I made, was to remove the meat from the dish so it would be kosher.


Cook pasta according to package directions. Drain water and set aside.

Stir diced tomatoes, beans, and spices into the onion mixture. Cook for several minutes, until heated through.

In a large bowl, beat eggs. Add spaghetti and toss until the noodles are completely coated with the egg.

Spoon half of the spaghetti spaghetti into a greased deep baking pan.

Spoon bean mixture into the pan.

Sprinkle cheese over the top of the strata and bake for an additional 15 minutes or until the cheese is melted and the spaghetti begins to brown. 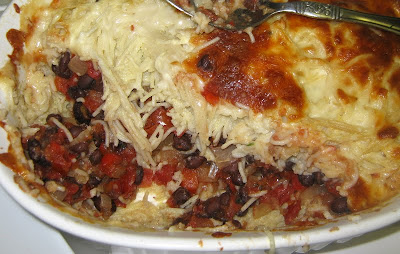