I had a vision of eggs with these scallions so I knew that was going to be an ingredient.  Cheese, of course, has to be there.   I needed another taste and also another color and I thought either tomato or bell peppers.  Tomatoes won.

This is a recipe made as I went along.  I had called it a kugel in my  Monday menu.  It doesn't feel like a kugel even though kugel is pudding.  Pudding won.  I think, the most difficult part of this recipe was naming it and I certainly don't have anything creative.

1 cup chopped scallions
3/4 cup tomatoes, chopped
1 cup Ricotta cheese (I thought about using Farmer cheese since I have some in the refrigerator.)
2 eggs 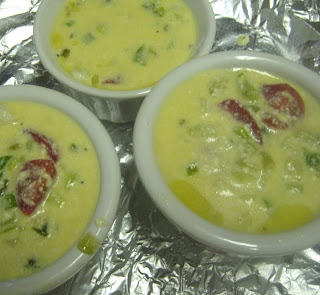 Spray a large skillet or use 1 tablespoon olive oil.  If you keep mixing it,  you can get away with the spray.  My goal is to cut down on fat.

Put scallions in pan and cook for 3-5 minutes, stirring occasionally.  Add tomatoes and cook for another minute until they are heated.

While the scallions are cooking, in a medium bowl, mix cheese, milk, eggs and seasoning.

Add scallions and tomatoes to cheese mixture and mix together.

I think this would be even better with more vegetables.  (zucchini, bell peppers, potatoes, onions, broccoli). 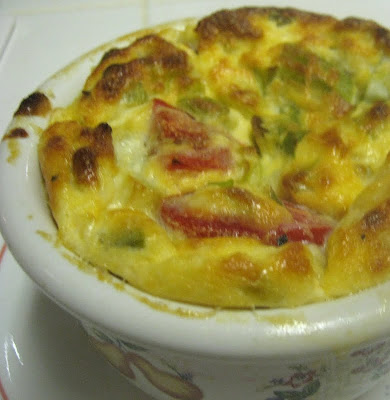