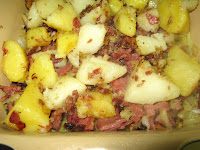 If you are wondering why I have the ingredients for this recipe in the title, it is because I have no idea what to call it.  It is delicious, filled with flavor and textures.  It has four of my favorite foods in it.  It was made up, on the spot, although, I certainly realize that these ingredients have gone together, many times, in other recipes.  I can't even decide which is the dominant flavor.  Pastrami has the strongest taste but I am lusting for the potatoes and onions.  The cabbage is the background for the others.

I started out, puzzled as what to do with the pastrami.  We had purchased a large package for the Sabbath but that was about the only thing, I had left , after my grandchildren returned to their own home, each ten pounds heavier.  This is the family whose children eat and I am thrilled about that.  I just wasn't prepared for the disappearance of all the desserts, the pickles, the salads, the side dishes and the challah.  Saturday night was a hungry night for the grandparents.  I guess, we could have had pastrami.

Note that my grandchildren came over so Bubby would not have to do anything after her surgery.  I absolutely appreciated that.  The problem was that they were busy eating and I sat watching.  Nope, I did not lift a finger.  Between my daughter and the five kids, they took care of each and every chore.  It is just that I wanted to taste MY rugelach.  OK, I'll take the grand-kids over rugelach, any day.

No, I will not start talking about my grandchildren, who happen to be the very best kids, in the world.  I am here, to discuss pastrami .......... and cabbage, potatoes and onions.

I decided to make a dish for the holiday that starts tomorrow night called Shavuot.  This is a real family type of dish but we eat four fancy meals with several courses and I am working on cutting back a bit on all those side dishes.  This has so much in it, I think a salad and a sweet vegetable as a side will suffice.

Since, I developed this dish, as I went along, I am not sure of the amounts, not that it matters.  If you are going to make this, if you like potatoes, put in loads of potatoes. If you are a cabbage fan, well shred that cabbage by the pound.  Now, if it is pastrami that is calling your name, that is more expensive than anything else and you just might not want to overdo it.  I love onions and used a huge onion and a half.
This is going to be the best I can guess for amounts.

In a large skillet, in hot oil, cook shredded cabbage and onions.  Caramelize the onions slightly - about 6 minutes, stirring often.

Spray a baking pan with cooking oil (size depends on how much of the veggies and meat, you use.)  Place a layer of cabbage & onions on the bottom of baking dish. 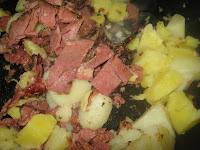 Add a little more oil to skillet and then add your pastrami.  Cook it for two minutes, stirring every thirty seconds.

Add potato chunks.  I made them pretty small (1/4 inch).  Brown them slightly, stirring them around to get all sides golden.

Remove pastrami and place on top of onions & cabbage.  Cook potatoes another minute or two.  Then place a layer of potatoes on top of pastrami. 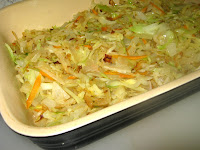 Now, you mess up all those layers by mixing them together, gently.

You are done.  If you would like to add salt and pepper, be my guest.  With the pastrami, I did not want more salt but pepper is a great idea.  If you have a favorite seasoning, go with it. 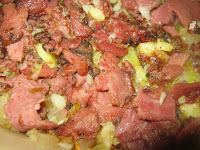 If you want to really live it up, break some eggs on top and place in a 350 degree oven for about 20 minutes until eggs are cooked.  You could also make it a bit fancy by leaving the potatoes on top and sprinkling smoked or hot paprika on top.  I thought about both ideas and I might just add those eggs and bake them, before dinner, tomorrow. 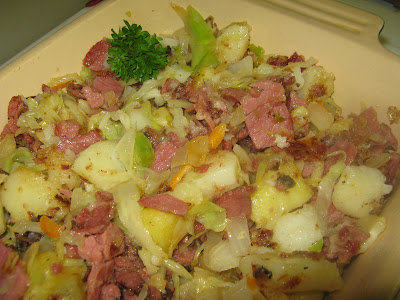 If you do make this, please let me know, what you think of it.  It is my kind of food.  It may not be yours but that would be sad because I think it is great.

Foodie Friday at Designs by Gollum

Its a Hodgepodge Friday,
Fresh,Clean and Pure Friday,