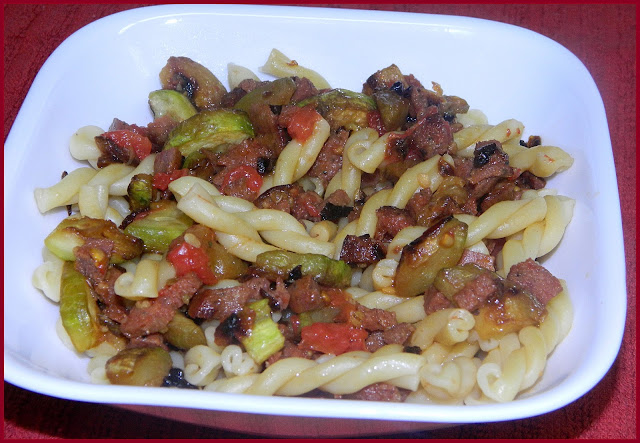 I found the recipe online so I am posting it this week.  This is from Guiliani Hazan't book, Thirty Minute Pasta which a few of us cook from weekly. The more I am using this book, I am finding its strengths and weaknesses.  For me, the book is a challenge because so many recipes are not kosher.  They either use pork or bacon or ham or there is a milk product and meat in a recipe.  When I remove or replace the item, the recipe, in some cases becomes a duplicate of another recipe in the book.  In fact, this recipe is made with ricotta, elsewhere in the book.  There are still plenty of recipes to make and then, there are those I modify to make the recipe work for us.

In fact, in this one, I removed Parmesan which I could not use with the sausage in the recipe.  I also did not use the pork sausage which was called for.  The other ingredients worked so I am paralleling the recipe - "almost."

Fill a large pot with water and cook it until boiling.  Drop in pasta and cook according to package directions.

Peel and chop the onion.
Put the olive oil in a 12-inch skillet, add the chopped onion, and place over medium-high heat.

Sauté until the onion just begins to turn a rich, golden color, about 5 minutes.


While the onion is sautéing, remove the casing from the sausage and break it up into pieces.

When the onion is ready, add the sausage to the pan.

Break the sausage up into small pieces with a wooden spoon and cook, stirring often, until the sausage is lightly browned, about 2 to 3 minutes.

While the sausage is cooking, wash the zucchini.

Remove the ends, cut into quarters lengthwise, and then cut across into ½-inch chunks.

When the sausage has lightly browned, add the zucchini.

Season lightly with salt and cook until the zucchini begins to brown and is mostly tender, 6 to 8 minutes.

While the zucchini is cooking, peel the tomatoes and coarsely chop them.

When the zucchini is ready, add the tomatoes, season lightly with salt, and cook until most of the liquid the tomatoes release has evaporated, 8 to 10 minutes.

If anything is not hot, cook for a minute or two and then serve.

.To see what the other ladies made check out Kayte, Margaret, Peggy, Glennis.