Yes, it is time for another secret recipe.  A quick review for anyone who does not know about the club.  Monthly, we are able to sign up for a secret partner.  We select a recipe from that person's blog, we have been assigned, and make it and post our own version of the recipe, on our own blog.

This group was originally organized by Amanda from Amanda's Cookin'.  The idea certainly has caught on and now there are multiple large groups, posting on three Mondays of the month.  I was assigned to the second Monday so here I am with a new favorite recipe.

I was delighted when I discovered which blog was assigned to me.  The Cookin' Chemist has recipes, beautifully presented and ever so appealing.  I went through the recipes on the blog, noting which ones, I wanted to make.  All of a sudden, I realized, I had a long list and I could not make all of them.  I decided to make the next recipe that called my name.  I had gone backwards and was all the way back to 2009.  I spent quite a while there, enjoying every moment.

As a huge sweet potato fan, this was a natural choice for me.  Recently, I have been adding black beans to a number of recipes so I knew, I even had all the ingredients, ready to cook with.

This recipe is amazingly easy to make and takes little time, as long as you use the microwave, which I did.  I made a few minor changes such as using parsley instead of cilantro (because I grow parsley and don't grow cilantro) 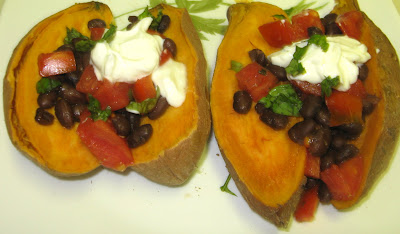 Wash and dry potatoes. Put in the microwave bag, and microwave on high for 5-6 minutes depending on the size of the potatoes. Alternately, can bake at 425 degrees for about an hour or microwave without the bag for 12-15 minutes.

Meanwhile, combine beans, tomato, oil, cumin, coriander, and salt in a medium microwave-safe bowl; microwave on high until just heated through, about 2-3 minutes.

When cool enough to handle, slash each sweet potato lengthwise, press open to make a well in the center, and spoon the bean mixture into the well. Top each with a dollop of sour cream and a sprinkle of parsley. 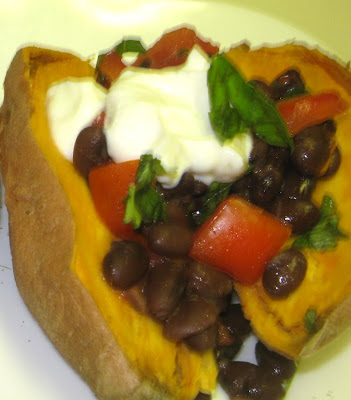