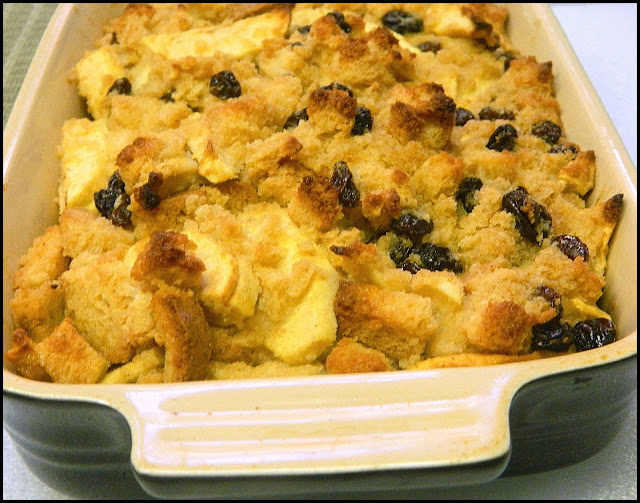 I rarely made bread dishes because we make all of our bread.  Finally, I broke down and bought 4 loaves of Katz's gluten-free bread for dishes like stuffing or bread pudding.  Since then, we have enjoyed French toast, stuffing and grilled cheese sandwiches, among other delicious dishes, we had been skipping.

I need the option of throwing together a meal in a short time.  That does not include baking bread.  Yes, I could make extra bread and freeze it but the reality is that I don't.  Now that doors have opened for us, it was easy for me to select this apple bread pudding for out them of apples for the Kosher Connection.

I served it as a side dish which was fine but what a special dessert it would make.  It would be good with a little maple syrup but it did not need it for sweetness.  I am a big fan of maple syrup on pancakes, waffles and French toast so why not this?

We did beat the apple season but this is good practice for the sweet dishes that we make for the upcoming Jewish holidays.  Actually, I made a number of apple dishes.  Apple makes everything better.

Just thinking:  Mango would be good in this pudding in place of the apples.  I would also use yellow raisins in place of the dark ones.  Dried apricot could be substituted as well.

In a large bowl, combine bread, raisins, and apples.

In a small saucepan over medium heat, combine 1 cup brown sugar, 1 3/4 cups milk, and 1/4 cup margarine.
Cook and stir until margarine is melted. Pour over bread mixture in bowl.
In a small bowl, whisk together cinnamon, 1/2 teaspoon vanilla, and eggs. Pour bread mixture into prepared dish, and pour egg mixture over bread.

Bake in preheated oven 40 to 50 minutes, or until center is set and apples are tender.

This did come with a sauce but hubby does not like any icings, sauces or frosting so I just don't bother.  You could though.  Just check the site and follow their lead.  Linked to See Ya in the Gumbo
Apple Bread Kosher Connection Pudding Raisins