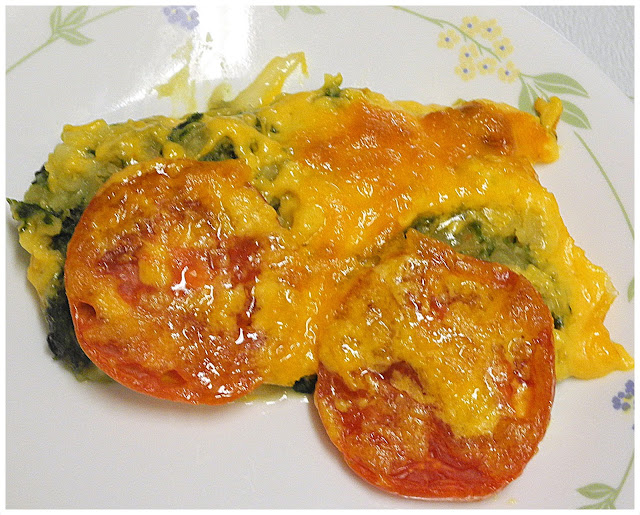 I am not sure what to name this dish.  I was looking for Swedish dishes and under Swedish recipes found a Rumbledethump.  I found out, right before, I was too cook it that it is not Swedish.  Sigh.

I was going to make it anyway; it looked like an interesting combination of vegetables.  A major player is the cabbage and I thought I had a bag of shredded cabbage but when I opened it, it was bad.  Now, I am happy this occurred.  I substituted spinach and it pulled everything together better than I am guessing, cabbage would have.

My husband was particularly thrilled, I used tomatoes, since they are multiplying, in our garden.  I have made a number of different sauces from them and thrown the tomatoes into pots of meat and skillets of vegetables.

I stuck with the directions, as much as possible, but cabbage needed different cooking than the spinach which wilts within a minute or two.

Boil potato pieces in a pot of water.  Cook for about 15 minutes or until they are fork done. (is that a real expression?)

Heat 2 tablespoons butter in a large skillet and cook until it melts.

Add the chopped spinach and mix together with the onions. Season with salt and pepper.

Cook for only a few minutes until the spinach wilts.

Mash the potatoes with a ricer or masher.

In a large bowl, combine spinach, onion and mashed potatoes.

Add 2 tablespoons of butter and the milk and mix together.

Place the mixture in the greased oval pan.

Place slices of tomato over the mixture.  Spread them out.

Bake in a 400 degree oven for 15 minutes or until the cheese is completely melted and slightly browned.

Let stand for 5 - 10 minutes to cool down.  I think, it is the tomatoes that maintains the heat. 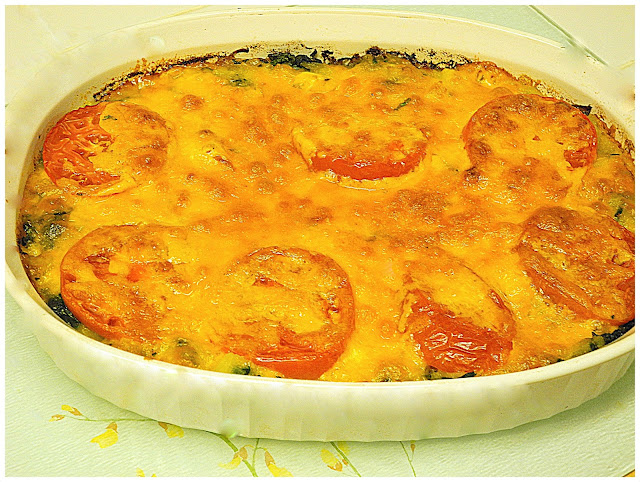