August 07, 2011
Kugel is described as a pudding but for me, there is no comparison.  There is a difference in texture, pudding being soft and more like a liquid.  There is more wonderful flavored substance to a kugel.

There are all kinds of kugels, the most common being potato and noodle (luchshen) kugel.  The noodle kugel serves either a side dish or when made sweet, as a dessert.  I serve all kugels as side dishes.  I make kugels such as carrot, broccoli, corn, cauliflower, bread kugel, rice, and most likely almost any vegetable, we can think of.

After years of kugels, I think, I shut down and wanted to make relatively plain vegetables so the kugel recipes have stayed on closed pages until last week, when I had some sweet potatoes to cook.  Rather than my recent recipes, kugel popped into my mind and I was off and running.

If you are making a kugel, feel free to change it, anyway, you would like.  Add spices, fruits, vegetables, textures.  Mix and match.  Cooking kugels can be fun.  Eating them is definitely fun.

2) In a small bowl, soak the raisins in orange juice, adding water so the raisins are covered. (You can speed up the plumping by microwaving for 30-45 seconds.)  (I didn't like the orange juice in this recipe.  Personally, I think, I would try apple juice, next time round.)

3) Peel the sweet potatoes. Using a grater blade on a food processor or a box grater, grate them. Put the grated sweet potatoes in a large mixing bowl.

5) Grate the apples, add to the sweet potato and egg mixture.

6) Stir in the salt and spices.

9)  Bake 40 minutes or so, until the edges are a little browned and the top gets golden. Let it cool a bit, then cut into pieces. 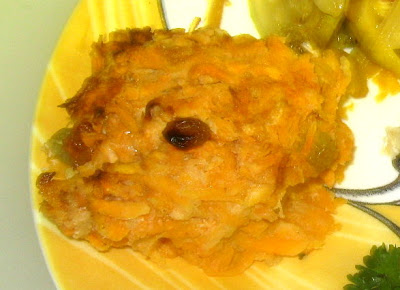 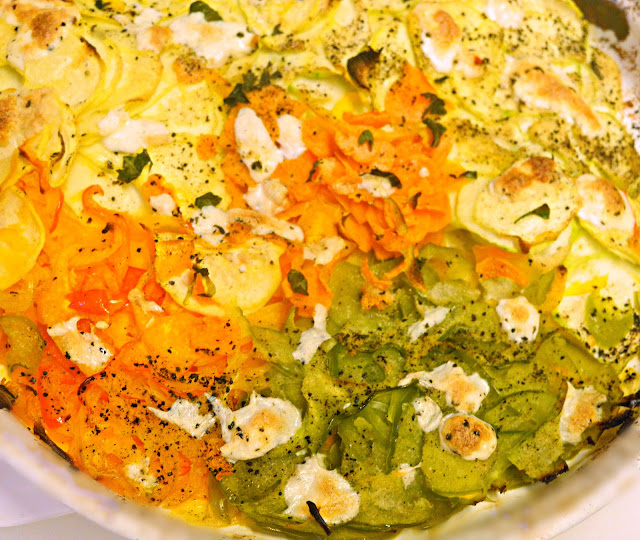 Veggie Delight I had no name for this dish, I put together, this evening.  I am finding it difficult to follow recipes from cookbooks or online.  Almost always, I take the recipe, in another direction.  That is what happened, today.  I pulled out a few cookbooks, found a recipe for roasted cubes of vegetables in a tomato sauce and covered with cheese.  It had veggies, I had in the house and the idea of roasting vegetables with a cheese topping intrigued me. I ended up slicing the veggies thinly on the mandolin and separately putting piles of them, in a baking dish.  I then dropped some spicy cheese on top, well spaced out.  It was delicious. Ingredients: 1 zucchini 1 yellow squash 2 carrots 1 mini red pepper 1 mini yellow pepper 1 mini orange pepper 1/4 green pepper spray olive oil 3 slices from a twisted spicy mozzarella roll 1/4 teaspoon black pepper 1 teaspoon chopped fresh oregano 1 teaspoon chopped fresh basil (my basil is returning) Method: Preheat oven
Read more