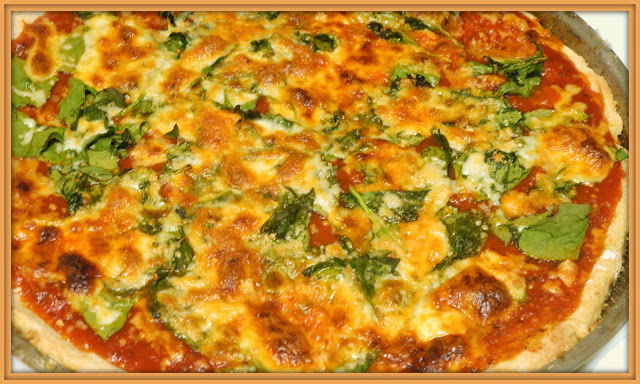 I  have to admit, I took a lot of liberties with this recipe because I had to make it gluten-free and because, I had spinach, not arugula, in the house.   Despite these changes, my inspiration was Ellie's French Bread Pizza.

I had saved a ball of pizza dough from the last time, I made pizza, and used that instead of the French Bread.  It would have been easier using bread.

After rolling out the dough and baking it at 400 degrees for 20 minutes, I poured marinara sauce on top of the surface and covered it with about 2 cups spinach and then with a little more than a cup of shredded mozzarella and 1/2 cup Parmesan.  I baked it for another 10 minutes or until the cheese turned golden.  Then, we demolished it.

Thanks to Ellie for the inspiration.
Cheese Dairy Pizza Sauce Spinach Tomato