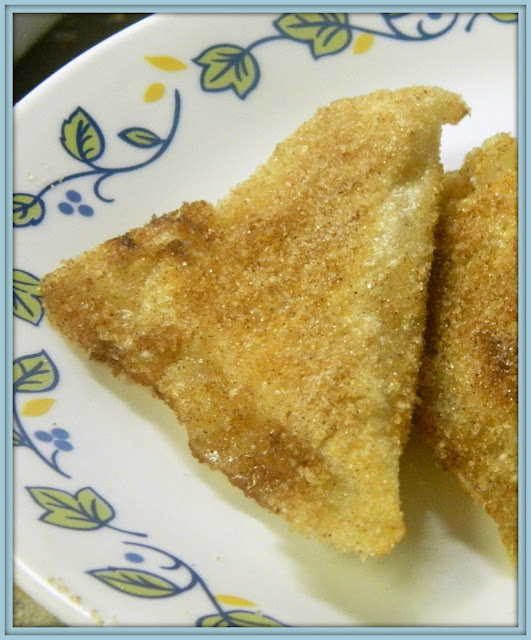 If you are also reading My Sweet and Savory, you are aware that Wonton Warrior has returned for a visit.  Gee, I hope, he doesn't plan to stay too long.  He is a difficult house guest..  The problem is that he likes to eat.......morning, noon and night and by night, I mean 2 AM.

Being used to a quiet house, it is a bit shocking, to hear noises, after midnight.  The bang of pots and pans and the clatter of the flatware and dishes is not conducive to  sleeping and I find myself, joining Mr. Warrior, at the oddest hours.  I admit to being curious as to what he is up to.

On one particular night, I rushed to the kitchen, after hearing something falling - only the spice shelf.  It could have been my glasses. Wonton Warrior was looking for cinnamon and did something no one else has done, dislodged the shelf that holds sugar, spices, baking powder and baking soda.  You get the picture.  My counter was a mess.

Evidently, Wonton Warrior welcomed me, that night.  He told me, he was going to reward me for cleaning up the mess.  His logic was that it is my kitchen and I am the one in charge.  Yeah sure.......until he wants to play.

OK, I admit it.  He did reward me with the most delicious cinnamon wontons, filled with cream cheese mixed with cinnamon sugar and dusted with more of the cinnamon mixture after it was cooked.

Wonton Warrior has become aware that deep frying is not the healthiest way to make wontons and baking leaves a lot to be desired.  He has come up with the two step method, first boiling and then kind of frying.

I have two wonderful skillets made from ceramic (at least the inside is) and you can cook right in them.  I do use a bit of oil to keep food moist.  These pans clean up like a dream.  The Warrior loves these, as you can imagine. 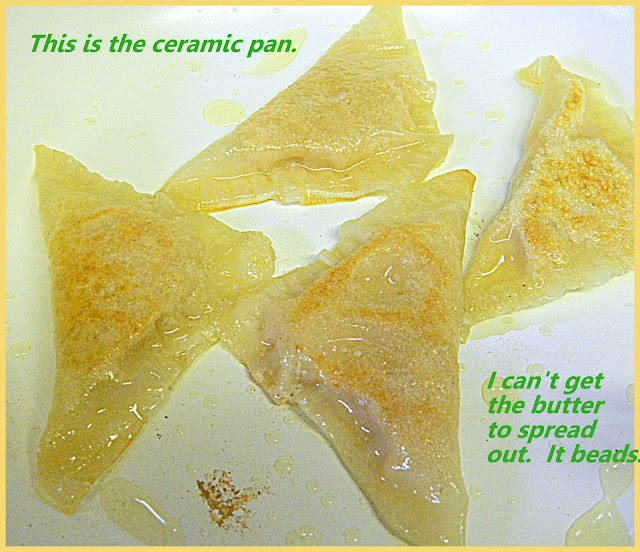 8 wonton wrappers
2/3 cup cream cheese (I use whipped)
3/4 cup cinnamon sugar (I make up some and put in a tight lidded container so I always have it on-hand.
1 teaspoon margarine, butter or oil
water

Half fill a large pot with water and place on stove on high until it boils.  Keep it boiling when you drop in the wontons.

In a medium size bowl, mix cream cheese and 1/2 cup cinnamon sugar.  I microwaved the cream cheese for 30 seconds to soften it up to make it more workable.

Brush each wonton with water.

Using a teaspoon, plop about that size on each of the wontons.

Make into a triangle and seal well.

Drop into boiling water and cook for 2-3 minutes.

While they are boiling, place butter or margarine or oil in a large skillet.

Scoop out the wontons and drop into skillet and cook until lightly browned.

Now you are ready for the Warrior's special dessert.  Eat and enjoy. 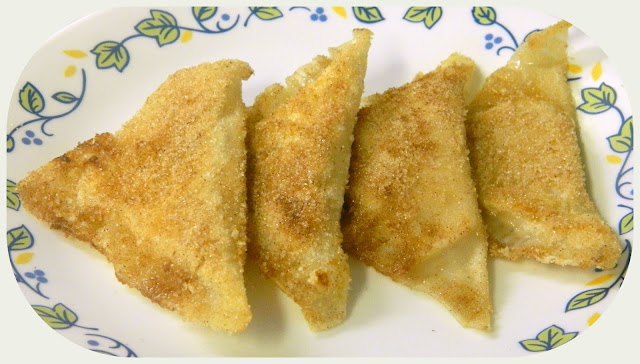